I was fortunate enough to have the opportunity to hear the swimmer Chris Cook speak recently. This was part of the build up to the Olympics for the children of our area as they had been part of a successful project called 'pass the passion' to get the Olympic torch to arrive in Dover.  He also met with the district school council.  His motivational work is based on something very close to my heart, keeping it simple. 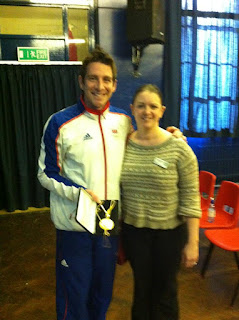 He tells a story about being referred to a sport psychologist in the lead up to the commonwealth games in 2006.  He was feeling overwhelmed at the time by the many different elements to training and nutrition and felt rather aggrieved when the psychologist told him he had an easy task.  When he argued about how difficult it actually was the reply he got was 'No, it's simple.  All you have to do is swim two lengths of the baths faster than everyone else.'

This really struck a chord with me in relation to keeping school improvement simple.  It also took me back to my own amateur sporting days.  When rowing for our local senior four we had two basic adages.  'Don't pay any attention to what any other crew can alledgedly do, we can only do something about what we do' and 'start as fast as you can and then hang on by the skin of your teeth until we cross the line!'  In other words, in the famous words of my mother when we lost our first race of the season 'well, just row faster than everyone else!'  We did, and won the next 12 races becoming coastal amateur rowing association south coast champions.

Chris Cook also told a fabulous story about winning gold in Melbourne in 2006.  His foot slipped off the start and it would have been the perfect excuse not to do well.  However he came back from far behind to win.  It doesn't matter where you start and what hampers your progress, it's determination and hard work that's the key.  Thinking about swimming then led me to compare the various swimming strokes to types of leadership.

In my first four years as a headteacher I have spent a fair bit of time trying out lots of different 'swimming strokes' of leadership.  Front crawl - where you can get up quite a bit of speed but your head is down apart from the occasional breath.  By the time you properly look up you find everyone else is floundering behind a bit in your wake.  Breast stroke - ok for the very experienced but I found my arms and legs got all out of time with one another causing clumsiness and confusion.  This stroke badly done as a leadership style commonly leads to muttered comments among staff about the right and left hands not knowing what one another are doing.  Butterfly - fine for the natural born swimmer but when most normal mortals try it we just look totally ridiculous.  Back stroke - relaxing but absolutely no idea what is going on ahead until you bump your head on something. Doggy paddle - hard work...and looks it!  As a child my favourite stroke was a sort of mixture of two.  Breastroke arms with front crawl legs.  Then as I became an experienced swimmer and practised more I found breastroke was fine and not so clumsy, and that sometimes I could do a length or so of front crawl if more speed and purpose were required.  Of course the stroke must be adapted to times where the waters are rough, or when the government switches on the wave machine.

It's well worth remembering though, of course, that swimming is fun and makes us feel good.  So does leadership.  Achievement in sporting terms is the best feeling ever, and so well worth the hours of training , the commitment and the sacrifices made.  Achieving the best we can as an organisation and pushing ourselves to the limit feels tough and too much sometimes.  However, it is also full of a sense of purpose and pride in the children we are doing it for.

Many thanks to Chris Cook for the inspiration and I will look forward to seeing him again at the Kent Headteacher conference in July.
Posted by Lynne Moore at 07:24 No comments: