'A squat grey building of only thirty-four stories.  Over the main entrance the words, CENTRAL LONDON HATCHERY AND CONDITIONING CENTRE, and, in a shield, the World State's motto, COMMUNITY, IDENTITY, STABILITY.'

The opening to one of my favourite ever books, Brave new world by Aldous Huxley.  Part of the list of essential reads given to me by my father when I was little more than a kid and he knew he probably wouldn't see me into adulthood.  To be fair, I'm not sure I'm there yet.

The motto is not disimilar to many of the mission statements and straplines I have seen in education in my 14 year journey so far.  Similarly to Huxley's context though, I'm not sure that 'identity' is defined in the same way as I would define it.  To me identity is my central core.  The lines I won't cross, the values that get me up every day and keep me going when things are tough.  Also my daft sense of humour, penchant for chatting to strangers, and tendency to wear my heart on my sleeve.

I sometimes wonder if, with social networking as it is now and my love of it, I will get myself into trouble at some point.  However, before twitter I chatted to people on trains, buses, in toilet queues and at festivals. I also feel that this is the me-ness of me.  It tops up my love of people and reaffirms my belief that people are good.  The vast majority of us all want the same things, the rest is pressure and media camera angles.

Individuals, eccentrics and those with their own identity didn't really fit into the 'Brave New World' as Huxley depicted it.  The impression sometimes is that they don't into education either.  However, surely sense would suggest that the opposite should be true.  I'm not even sure that the opposite ISN'T true!  If you look at outstanding schools one of the common similarities is brave and different leadership.  The government want innovative leaders, Ofsted like that and much more importantly, they get great results.

A formula for success in education has been the suggestion since I have been in it.  However, what actually works in my opinion, is the opposite to that.  Breaking the mould, daring to be different, trying new ideas.  Whenever I go to a local authority briefing there is a new grid with steps to tick to get to success.  The last one raised a wry smile with me as ours have inserted a new level above outstanding which they have entitled 'world class.' Ironically I was world class a couple of years ago, but at the time it meant I was rubbish and in need of support! 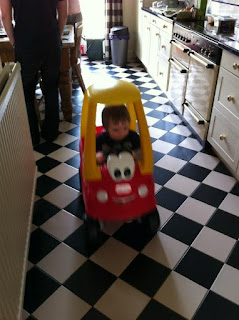 When my son wants to perfect something he has a go, messes up, then has another go.  He adjusts his approach tries new methods and perseveres until he achieves success.  When he first rode in one of these cars he caused a furore at the toddler group his grandma takes him to as he disappeared into the bit under the front and got himself stuck!  He is pretty good now though, he can steer and pick up speed.

In this brave new world we need to be brave enough to have a go, believe in what we are doing and speak up for ourselves.  We need to refine our skills and knowledge so that we have our impact evidence at our fingertips.  This is what leaders have done in the business world for years.  This is already rewarded by inspection teams and it gets results.  Obviously we are not in the business of hatchery, but we are conditioning the future population.
Posted by Lynne Moore at 12:04